Beginning with the construction of the Texas State Capitol, Red Sunset granite has played a prominent role in the architecture of the Capitol Complex. The beautiful pink hue of the stone can be seen on several state buildings in the Complex, including the
Bob Bullock Texas State History Museum, Lorenzo de Zavala Library and Archives Building, Sam Houston Building, and Robert E. Johnson Building. The granite on the new buildings under construction in the Capitol Complex is the same type of granite and it was all sourced from the same quarry – Granite Mountain in Marble Falls. When the buildings and amenities of the Capitol Complex Phase I Project open in Summer 2022, the heritage of Texas Red Sunset granite will serve as a tribute to our past.

A prominent geological feature, Granite Mountain was part of a land grant made to the family of William Slaughter in the early days of the Texas Republic. In 1867, the Slaughter family sold Granite Mountain to George W. Lacy. He formed a partnership with
William H. Westfall and Nimrod L. Norton and opened a quarry on Granite Mountain in 1882. In 1885 the partnership agreed to provide free “Texas Pink” granite for the construction of the State Capitol building as part of a deal that would extend the Austin Northwestern Railroad six miles from Fairland (north of Marble Falls) to Granite Mountain.

It took 4,000 train trips to transport 15,700 flatcars of granite from Granite Mountain to the State Capitol construction site between 1886 to 1887. However, not all the large granite blocks made it to their destination. An estimated fifty granite blocks, each weighing several tons, fell off the flatcars. Most of these massive boulders are still where they landed, serving as a reminder of the enormous effort 133 years ago to build the largest state capitol in the U.S. 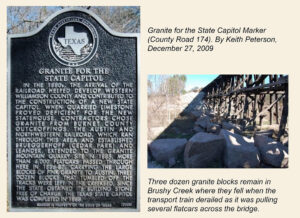 Granite is formed when part of the Earth’s crust melts and then cools, eventually pushing its way to the surface in a solid mass. The color of granite depends upon the mix of minerals, temperature, pressure, and moisture conditions when the mass was formed.

Coldspring Granite Company bought the Granite Mountain quarry in the 1950s, and in the 1980s, the company opened a new quarry in Granite Shoals. This quarry produced a lighter paler shade of pink granite. The company decided that the Granite Shoals granite would be called “Texas Pink,” and the Granite Mountain granite would be called “Red Sunset.” This is why you will see historic references to Texas Pink and Red Sunset granite in documents about the State Capitol and other buildings in the Capitol Complex.

Merging the Past with the Future

From the beginning concepts outlined in the 2016 Capitol Complex Master Plan to the current construction of Phase I, the project architects and designers have made a visual statement using modern urban design methodology while respecting the history of the Capitol Complex.

“The Capitol Complex Master Plan characterizes buildings as “Focus” or “Fabric” buildings to describe how different buildings relate to the larger whole of the campus. “Focus” buildings, such as the George H.W. Bush Building, help anchor important sites in the campus. “Fabric” buildings, such as the Barbara Jordan Building, are intended to complement each other and help reinforce the prominence of the surrounding buildings. The Barbara Jordan Building at 1601 Congress is an example of a “Fabric” building. Together, the architecture of the Focus and Fabric buildings help establish a unifying architectural fabric that frames the important view of the Texas Capitol at the end of the new Mall,” said Paul A. Bielamowicz, Principal and Architect at Page.

The cohesive design creates visual continuity along the new Texas Capitol Mall lined on both sides by historic structures. Beginning with the magnificent Capitol Building on the southern border of the Capitol Complex, Red Sunset granite traverses the Mall connecting existing structures like the Robert E. Johnson Building to the new Barbara Jordan State Office Building. The red granite and green open space of the Texas Capitol Mall crescendos at the northern end of the Mall with the architectural design of the massive George H.W. Bush Building complimenting the Bob Bullock Texas State History Museum. These buildings stand as pillars of a new Cultural Gateway that extends across MLK Blvd. and continues onto the University of Texas campus with the Blanton Museum. An etched granite monument sign between the Bush Building and Bullock Museum will announce the northern entry to the Texas Capitol Mall.

The use of Red Sunset granite is not limited to the exterior of the new state office buildings. The interior, high-ceiling lobbies of both the George H.W. Bush and Barbara Jordan State Office Buildings will both feature walls clad in Red Sunset granite. 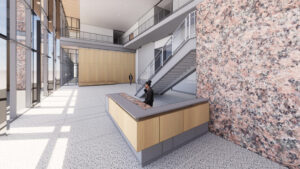 A Once in a Lifetime Project

ENR Texas Louisiana summed up the magnitude of the Texas Capitol Complex Project as it, “dwarfs any project the state has undertaken since construction of the 132-year-old Capitol itself.” (March 2020). Texas Facilities Commission Executive Director Mike Novak has described the project as “like building the pyramids.” It’s easy to imagine that those responsible for delivering and installing 1,600 tons of Red Sunset granite for the Capitol Complex Phase I Project would agree with these statements. 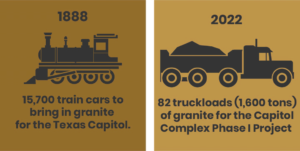 We salute all those that quarried the granite and transported it to the project site as well as the master craftspeople who are shaping and installing the granite into modern structures that honor our Texas history. Their efforts have moved at least part of a mountain – a Granite Mountain. 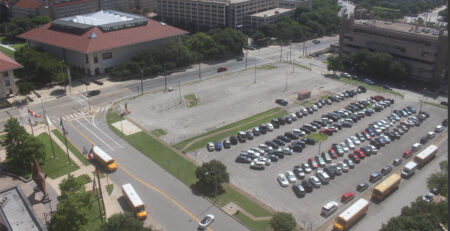 The Texas Facilities Commission has been working on the transformation of the Capitol Complex since 2010 when it first... read more 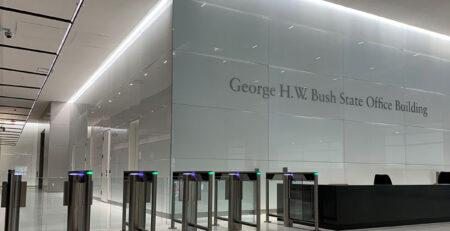 Although our flagship building is still under construction, several floors are complete, and tenants have moved into their office... read more 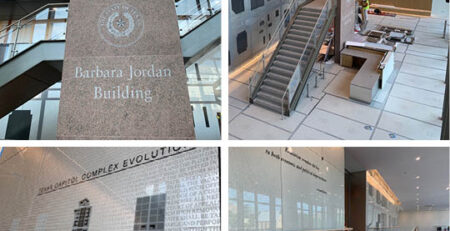 This beautiful building will be the new home of the Texas Department of Insurance (TDI) and the Capitol Complex... read more 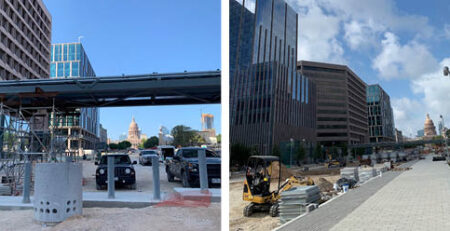 The Texas Mall is taking shape. Construction crews are laying sidewalks and pavers to form the pedestrian path from... read more

Eyes in the Sky – Construction Cameras

Watch the progress on all the Capitol Complex projects via the construction cameras on our project website at www.TexasCapitolComplex.org  For... read more 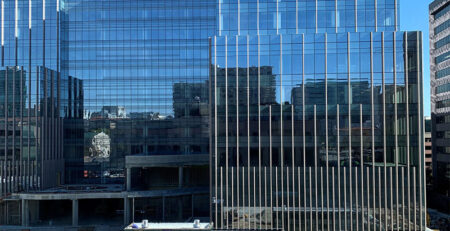 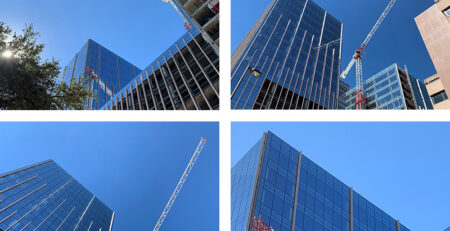 Each new day on the Capitol Complex Project brings a flurry of activity carefully choreographed for maximum safety and... read more 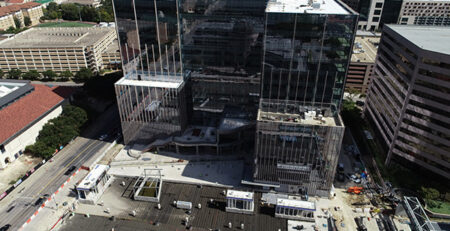 The interiors of the new Capitol Complex buildings are progressing rapidly and the anticipation of the relocation into these... read more